On Saturday the 20th of May I headed up to Parliament Hill Athletics track to take part in Night of the 10,000m PBs. In 2015 and 2016 The Running Works retailed at the event so over the last couple of years I have seen how the event has developed and grown. The atmosphere was electric, I wanted to take part and experience the race from lane 1. Last year I ran 34:50 in the Orion Harriers Fast Friday 10,000m at Walthamstow Track allowing me to register for the Highgate 10k. I was initially put on the waitlist as the standard had risen but in the week or so leading up to the races I found out there was space for me. On seeing the start lists I realized I was the slowest, by quite a margin, in the E race. I knew this meant I would be left behind and lapped but I was still really excited to take part, spend the rest of the day cheering on friends in other races and watch the World Championship qualifiers.

I arrived at the track in plenty of time to register, pick up a race day programme from Left Spike Fanzine and sort my race kit. 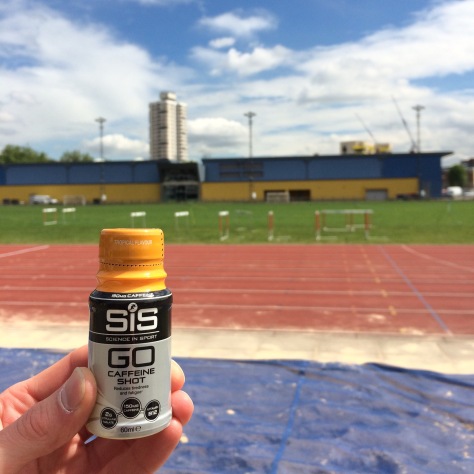 Having tested the Science in Sport Go Caffeine shots on Thursday morning before a track session with Hannah Walker I opted to take one at 2:45pm (30 minutes before the start of the race as recommended). It definitely perked me up; I was feeling ready to race and hoped that my legs would loosen up after a few laps. On the start line I had a quick catch up with my friend Dom, chatted to some of the other racers about goal times and then we were led to the start line. Knowing the majority of the guys in the race were aiming for 31-32 minutes I positioned myself at the back as I didn’t want to get caught up, go out too fast and blow up as there is nowhere to hide on track. I stuck to my plan of starting at around PB pace (3:30min/km). The first few laps passed and I was on pace, however it was feeling tough as my legs were heavy and I was already a good few hundred metres behind the rest of the group. I was immediately thinking “Ah man, I probably shouldn’t have pushed it at track on Tuesday or done so many kilometre reps on Thursday morning.” On the other hand I was thinking “Ease up a little and get it done, it’s good training to try and push the pace on tired legs and it’s been a good week mileage wise in training for OCC.” 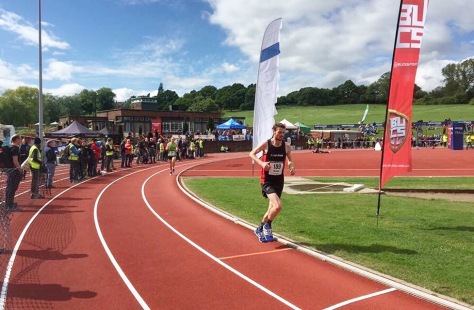 My race “Afternoon of the 10,000m sufferfest” had begun, luckily though I was ticking off the laps quickly (mentally) thanks to friends and supporters shouting “Go on Skinner!!” every hundred metres or so. It was frustrating not to have any speed in the legs as I was breathing so easily, if someone was running alongside (unfortunately not the case) I could’ve had a nice good chat with them. I was lapped a few times which was demoralising but at the end of the day I couldn’t be too disheartened as I had put myself in that position, the pain was self-inflicted. Every kilometre was becoming slower and slower, I had gone from 3:28min/km to 3:49min/km throughout the race, there were so many times when I thought “I could walk off the side of the track and not many people would notice” but on the other hand I was thinking I would be letting Ben Pochee and the people supporting me down. I finally crossed the line in 36:21, a minute and a half slower than my PB. It was a humbling experience and I learnt if I want to race or do a decent time I definitely need to taper.

After finishing the race I walked past two guys lying on the floor exhausted. I felt guilty that maybe I hadn’t put in as much effort as them but once a PB was out of my reach self-preservation was my main priority. I did a quick cool down with Dom, he too struggled on the day but we both know why and what we need to do. I then met up with the Advent Running crew trackside; the first thing I said to them was “don’t ever do 10,000m on track”. The second thing I said was “there’s a 5,000m/10,000m event at Walthamstow Track in a couple of weeks” ha. I grabbed some pizza and we got a good position to watch the rest of the races unfold. In the men’s C race Ben Johnson (Run-Fast) had a great run beating his PB by 15 seconds or so. He’s in great form at the moment having finished the London Marathon in 2:21 earning an England vest in the Toronto Marathon later this year. It’s great to run at track on Tuesdays with the likes of him and Pete Huck (sub 30 minute 10k runner) and see what it takes to get to that level.

I felt relieved to have finished my race; I could relax and enjoy watching the rest of the races with Lorna and friends.

I was looking forward to seeing who would win out of Dewie Griffiths, Andy Vernon and Ben Connor and the women’s start list was stellar. Andy Vernon opened up a large gap with 10 or so laps to go, the pace wasn’t quick enough to go sub 27:45 (World Champs qualifying time) as it was a little windy, but Andy finished first in 28:16.

In the end Beth Potter ran away from Steph Well to win in 32:04. Steph finished just one second outside of the 32:15 qualifying time for the World Champs in August and Katrina Wootton took third after a good battle with Jo Pavey.

The atmosphere was awesome for the A races, it makes me want to get quicker so I can one day take part in one of the later races.

For a more in depth recap of the day read this great article by sixth counter: http://www.sixthcounter.com/from-highgate-to-stratford

Overall it was an awesome day of running to take part in and observe, I can’t wait for next year already. Thanks to everyone that cheered me on in my race.

I am racing in the Westminster Mile on Sunday so if you’re going to be there give me a shout.

See a lot of you soon