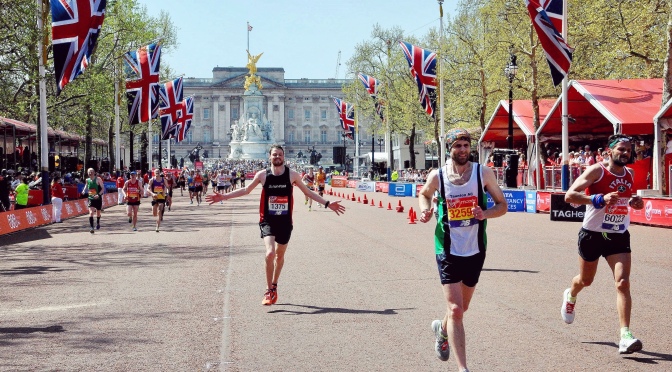 On Sunday 28th April I took part in my third London Marathon. I’m incredibly lucky to be able to qualify for the race having ran sub 75 minutes for half marathons. My previous London Marathon experiences in 2016 and 2018 were special so I couldn’t wait to do it all again and enjoy the amazing crowd support. After running the Seville Marathon in February in a PB of 2:52 I was hoping to squeeze in some specific training and shave a little more time off. Five weeks after Seville I ran the Colchester Half Marathon crossing the line in 1:13:58 so I knew I was in good shape. However, the marathon is a different ball game and I doubted I had done enough long runs near marathon pace to warrant chasing a big PB. After completing a couple of 20k+ runs it was soon time to taper again. I headed to track on Tuesday nights for a couple of weeks to sharpen up before dialling back the mileage but kept the legs ticking over.

The race came around quickly with being busy at work and fitting in training. On the Saturday before the race Lorna and I made sure to have a relaxing day; we prioritised carb loading, meeting up with friends Hayley, Will & Jackson for brunch and having dinner with her brothers Alex and Rob who were also taking part in the marathon. Having ran 3:11 in Seville Alex was opting to go out fast and try to hold on while Rob was running his first marathon, celebrating his birthday and raising money for the charity Sense. Having to travel in to Greenwich from Chelmsford we got an early night ahead of the big day. I slept well and was feeling relaxed about the challenge. 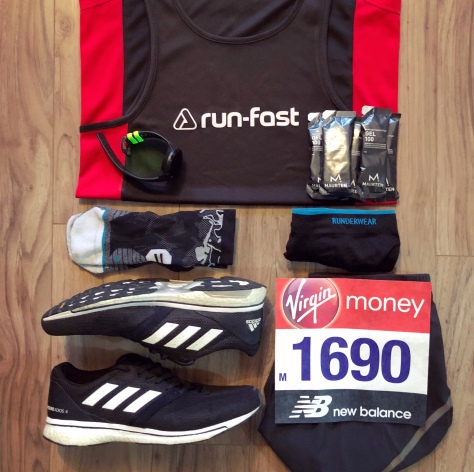 Lorna and I left our flat at around 7am to begin our journey to Greenwich; we got the train to Stratford where we met up with Alex, Rob, Ben, Liv and Harrison. Ben was taking part in his first marathon while his wife Liv and son Harrison were going to cheer us around the course. 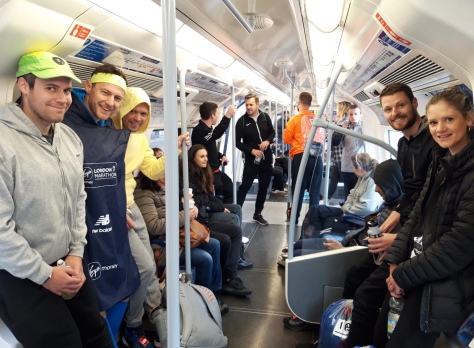 We got the jubilee line to London Bridge before going our separate ways; Lorna and I were allocated the blue start on Blackheath due to gaining our places through GFA & Championship entry. The boys headed to Maze Hill as they got in through charity places. 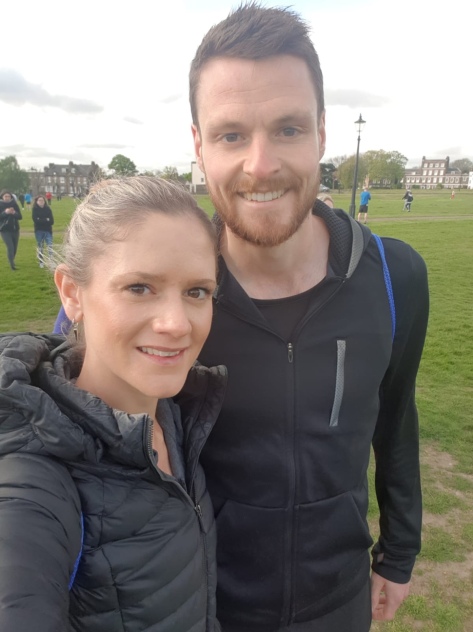 Once we arrived at the blue start area, I wished Lorna luck and headed to the Championship entry corner to drop my bag. It was good to see lots of familiar faces while walking to the start, I had a quick catch up with Sorrell and Claudi before the elite runners were introduced and Andy Murray got the race underway.

My plan was to try and run an even race, I set out near 4:05min/km (2:52 marathon pace). With the first 5k or so being gradually downhill I purposefully held back to save energy as opposed to bank time, I clocked 20:08 for the opening 5k. I settled into a good rhythm, took my first Maurten gel at 7k and went through 10k in 40:25. 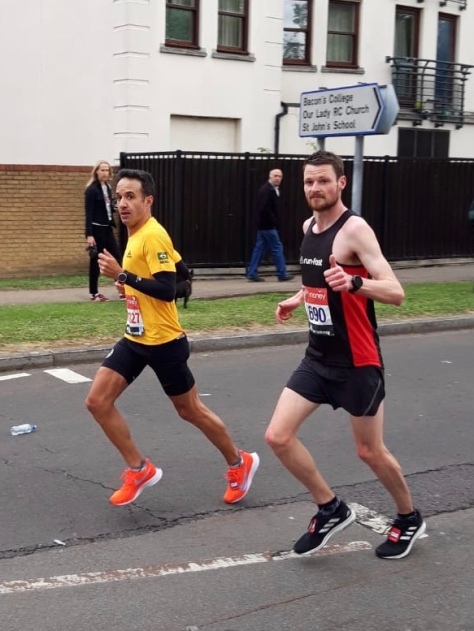 Thanks for the shouts Liv (@liv_chiv)

Having ran London twice before I know it is a good race to enjoy and appreciate the crowd support. Running around the Cutty Sark I kept my head up and soaked up the atmosphere, it was electric. I thought it may be quieter as the weather wasn’t as good as last year but if anything it was busier than ever. Despite rarely looking at my watch I was holding pace well and feeling comfortable, I ran the third 5k in 20:35 going through 15k in 1:01.

Between the Cutty Sark and Tower Bridge I shared a few miles with Adam Lennox and Steve Hobbs (The Milestone Pursuit founder/coach); Adam was aiming for a PB and Steve was using it as training for Comrades Marathon. It was nice to catch up with them both, the miles went quickly and I was soon approaching (for me) the highlight of the race. The crowds grow and grow as you run up over Tower Bridge, it gives me goose bumps just thinking about it. It’s special to be running down the middle of the road with thousands of people cheering you on. In comparison to running London for the first time in 2016 I felt fresher and more relaxed knowing what lied ahead. My fourth 5k split was 20:23 and I went through halfway in around 1:26. I knew the hardest part of the race was to come but felt ready for the challenge. I continued to sip on water at every aid station and take a Maurten gel every 7k which worked well.

Heading away from the crowds and towards Canary Wharf is always a little demoralising, it seems quiet after the high of running over Tower Bridge. However, I felt more present throughout the race than on previous occasions. I think because I averaged 4:05min/km pace in the Seville Marathon I was relaxed and felt more comfortable holding that pace. It allowed me to look around and spot friends in the crowd. The miles through Canary Wharf seemed to go a lot quicker thanin 2016 and 2018. I’m not sure if it was just me but I got the impression more people opted to cheer there. I was relieved to get through what is normally one of the harder sections of the route and looked forward to running past Tower Bridge and along Embankment. Plenty of the run crews had set up cheer stations roadside which always helps, especially when you’re really starting to tire. 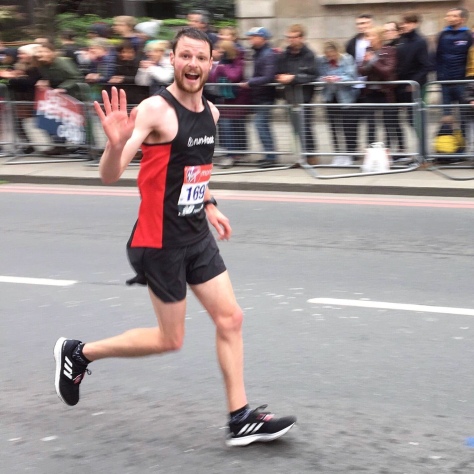 It was great to see so many friends along the route. Thanks for the photo Rocco (@roccoroy)

I made it along Embankment and was still feeling good. In a marathon you never quite know what pace to start at and what you can hold but I was relieved to get that far and not suffer too much. I took the right turn at Big Ben and knew I had just over a kilometre to endure. I picked the pace up a little, passing quite a few runners. Another right turn onto the mall and the finish line was in view. I hadn’t managed a PB but was happy to clock another sub 3 finish, crossing the line in 2:55:08. 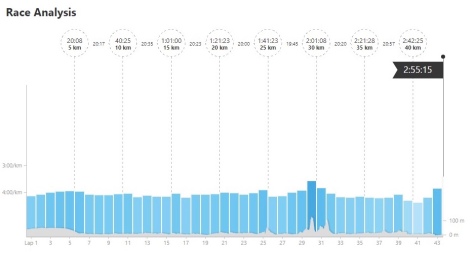 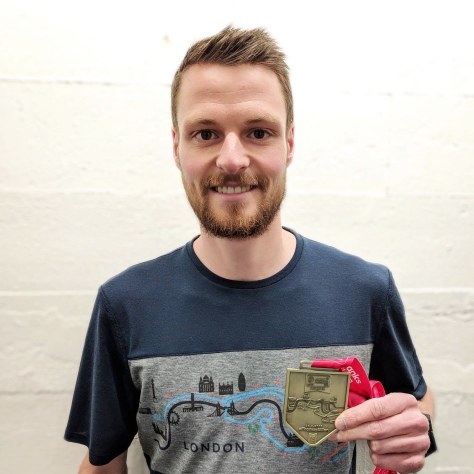 On one hand I was disappointed not to PB but on the other I was pleased with how I executed my race plan and that I got to enjoy the London Marathon again. As the conditions were good so many friends achieved incredible times, well done to those of you that ran. It is such an inspiring day to take part in, it is definitely time for me to set some new goals and get into a good training routine again. The marathon takes a lot of specific training if you are aiming for certain times, you definitely can’t wing it. Over the next few months I’m going to focus on the shorter distances for a while and then I will build up for another marathon later in the year.

Thank you so much to those of you that sent messages of good luck &/or well-done last weekend, I really appreciate your support.

Hope the recovery is going well for those of you that raced. Catch up with a lot of you soon.