Over the last few years Lorna and I have travelled with friends to various European cities to take part in races. This year we opted for Lucerne in Switzerland because it offered a half and full marathon, the course looked scenic on the flyers and we were guaranteed great food and chocolate after the race. I signed up to the marathon while Lorna, Alex, Rob, Ray and Robbie decided to go for the half.

We flew into Zurich early on Saturday morning before catching a train to Lucerne. Lorna had found a lovely apartment not far from the train station, race expo and start. Having dropped our bags we headed to the expo at Hotel Schweizerhof. 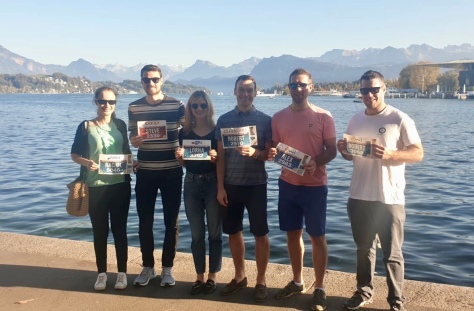 Collecting our numbers was easy as there weren’t any queues, so we could head straight to the pasta party to continue the carb loading. 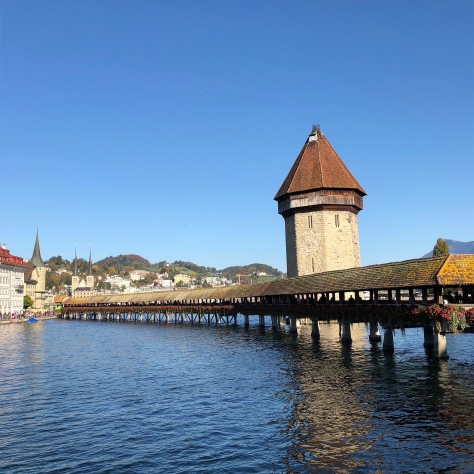 As the sun was shining we picked up an ice cream before taking some photos and heading out on the lake on a pedalo. Lorna and I sensibly saved our legs and let Emma and Ray do the hard work. For dinner we decided to play it safe and have some pasta and pizza from the local supermarket. Without a TV in the apartment we played cards in the evening to relax before getting an early night.

The race started at 9am so we woke up at 7am to shower, have breakfast and sort our race kit. 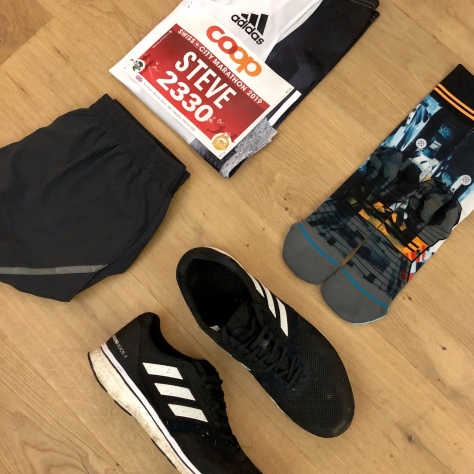 I was feeling really relaxed about the race. Since the London Marathon in April I hadn’t ran/trained much so I planned to run the first half with Lorna aiming for around 1:35 and then see how I felt for the second lap. The conditions were perfect, the sun was shining again and it was cool as we walked towards the start. As the apartment wasn’t far from the finish we didn’t have to drop bags so we could get straight to the start line. We wished everyone good luck and positioned ourselves near the 1:35 pacer. Alex was hoping to finish in a similar time so we started together.

One thing I love about smaller marathons (in comparison to London & Boston etc) is that you don’t have to stress about bag drop and waiting around for ages. We got to the start line just 10 minutes before the gun and then we were off. 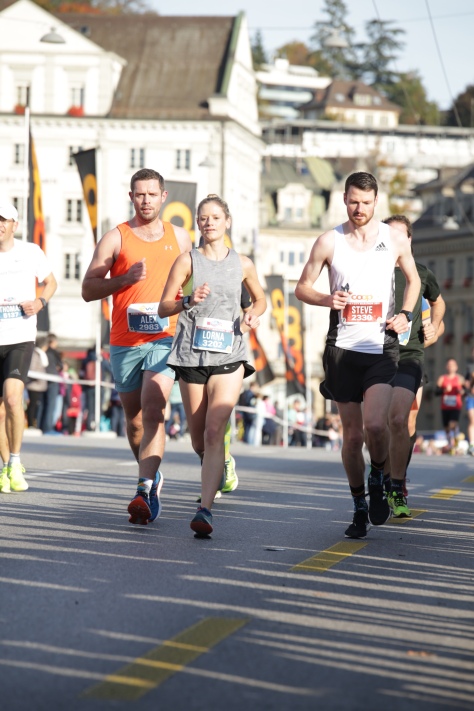 As the road was nice and wide we had lots of room to run in and settle on goal pace. We knew 4:30min/km pace was what we needed to hold to finish in 1:35. I let Lorna and Al run slightly ahead of me to dictate the pace they felt comfortable at. This was slightly inside goal pace but not too fast to be worried about. It’s pretty normal with fresh tapered legs and the adrenaline of starting a race to bank a few seconds through the first 5k or so. There were a couple of hills towards the end of the opening 10k which levelled out our average pace to be pretty much spot on.

Running alongside the lake the views of the surrounding mountains were incredible. Alex joked that he was glad he only had to run the hills once but I was thinking “I don’t mind two laps with views like this”. Of course I knew it would be a tough second half having not trained much and running it on my own but I was feeling good and looking forward to the challenge. After 11k or so Lorna was feeling good so we picked up the pace while Al eased off a bit.

The second half of the loop weaving through the city was fun and we kept pushing. The kilometres passed really quickly and we were on the long home stretch before we knew it, Lorna said “it feels like we were only just walking down here to the start”. I could tell she was digging deep as we neared the marathon turnaround point but I was so proud of her for working hard throughout the whole race and crossing the line in 1:34. I really wanted to carry on running with her through the finish line but with 800m to go I took the u-turn to start my second lap.

It felt really strange to have been running with Lorna to help with her race to then be focused on seeing what time I could achieve. Surprisingly my legs felt good so I decided to see if I could get as close to 3 hours as possible. I knew I’d have to average around 4min/km pace through the second half so picked it up and got into a rhythm. The roads were really quiet so I could focus and stick to the racing line. Despite wanting to regularly check I was on the correct pace I kept my head up to enjoy the mountain views again.

I felt relieved to get through the hilly part of the course with the legs still feeling ok. As it was getting hotter I took on water at every aid station and stuck to my nutrition plan, taking a Maurten gel every 7k. This worked well in both the Seville & London Marathons earlier in the year. Making my way back through the city centre I was still holding around 4min/km pace. The crowd support was awesome and there were lots of bands dotted along the course playing great music.

I knew the last couple of kilometres along the lake would be tough but I kept pushing as I was going to clock over the marathon distance on my watch and had to account for this. As I neared the finish Alex, Robbie, Ray and Rob cheered me on as they were walking back towards the apartment. Rob shouted “run faster!” but I was thinking “if I try to run any faster my hamstrings will go”. I held it together and eventually the finish gantry came into view. The clock was ticking ever closer to 3:00:00. I broke into one of those sort of sprint shuffles and crossed the line with the clock reading 3:00:04. Luckily we hadn’t crossed the start line bang on 9am so my official time was 2:59:25… phew! Another sub 3 marathon in the bag. Considering the lack of training throughout the summer I thought I would have to settle for nearer 3:10-3:15 so I was really happy.

Everyone else enjoyed the scenic route and ran well. Robbie clocked another sub 1:30 half, Al finished in 1:38, Rob finished under 1:45 and Ray crossed the line in 1:48. Overall an excellent and very successful race. 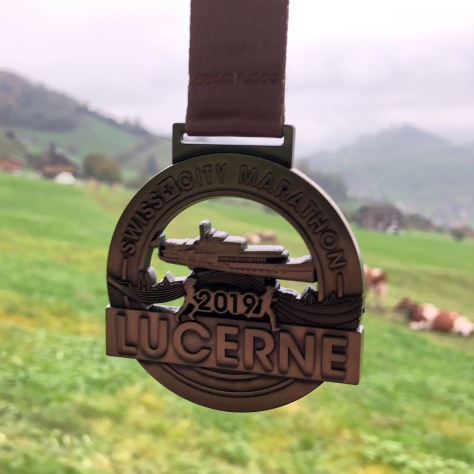 Now the legs are recovering we’ve all been thinking about future races. Lorna, Al, Robbie and I are all taking part in the Barcelona Marathon in March so after a couple of easy weeks the mileage will creep back up in a bid to go into 2020 in good shape.

Now that I am back in London, working for adidas in the flagship store on Oxford Street, I hope to catch up and run with a lot of you soon.